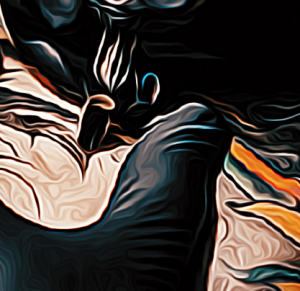 I turned around and frowned, trying to see who in the crowded locker room had just spoken. A young guy with sandy-blonde hair and wearing nothing but a pair of sunglasses was nodding enthusiastically in my direction.

‘Thanks,’ I smiled politely, averting my eyes slightly. ‘Glad you like it.’

‘Just a tattoo shop near the Brisbane CBD,’ I said, angling my body away in an attempt to end the conversation.

‘Nice, nice!’ he chuckled. I heard some minor grumblings and the sound of skin slapping against skin, and turned around despite myself – to find him right in front of my face.

‘So what’s the ink mean?’ he asked, goofy grin poking out from underneath his glasses.

‘The ink…’ I glanced around for support, but nobody else was willing to make eye contact. ‘I don’t know, I got it on a dare when I was eighteen. Do you mind, pal, I’m trying to towel off.’

‘Yeah, yeah, no stress my dude!’ he said, still grinning. He put his hands in the air to show he wasn’t trying to be threatening, but in reality it just showed off the extra foot of height he had on me.

‘Is it tribal, though?’ he asked, before he turned around.

‘Is it one of those, y’know, tribal tattoos.’

‘I don’t know,’ I sighed. ‘To be honest, I forget that it’s there. I probably haven’t looked at it in years.’

‘Do you remember the guy?’

‘Good point, no doubt,’ he said solemnly. ‘Do you remember the guy – or the chick?’

‘Chicks can be artists too, brah,’ he nodded seriously. ‘Do you remember them?’

‘It’s just that I know a guy who does those, like a tribal tattooist. That’s near me, though. Hey, where do you live?’

‘I’m definitely not telling you that,’ I said, slamming my locker shut. ‘And I’m leaving.’

‘But you’re still wet!’ he called after me.

I was already out of the door.