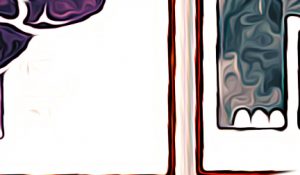 As mum and I sat in silence, the doctor arrived. We must have looked very concerned because the doctor used a voice that I had never heard before. It was soft, kind and considerate. Normally doctors just get straight to the point and tell you what you need to know. They’re so overworked that they don’t have time to frame things in an easy to understand way. It’s not their fault, it’s just the way the health system has been set up.

The doctor sat down on the waiting room chair next to me. He stared at what I was staring at, which was the nursery wallpaper spread all across the hospital room’s walls. Because I’m under the age of eighteen, I’m in the children’s section of the hospital. It has to cater for children of all ages and I guess the really young children are the ones who need the support most.

After a few moments, the doctor delivered the bad news. My blood test results had come back saying everything we feared they would say. I don’t want to go into the specifics because that will give away too much about who I am, but it’s pretty much the worst news we could have imagined. You should have heard the whimper my mum let out when the doctor broke the news. It broke my heart and if I’m honest, it broke the doctor’s heart too.

I wasn’t coherent enough to react when the doctor told us the results. I was too busy trying to focus on the unicorn wall decal which was positioned right next to the clock on the wall. It was odd positioning, I thought. That is and was about as much as I could think about at that moment. I don’t and didn’t want to think about the consequences of this. I’m either going to be sick for the rest of my life or have my life cut short.